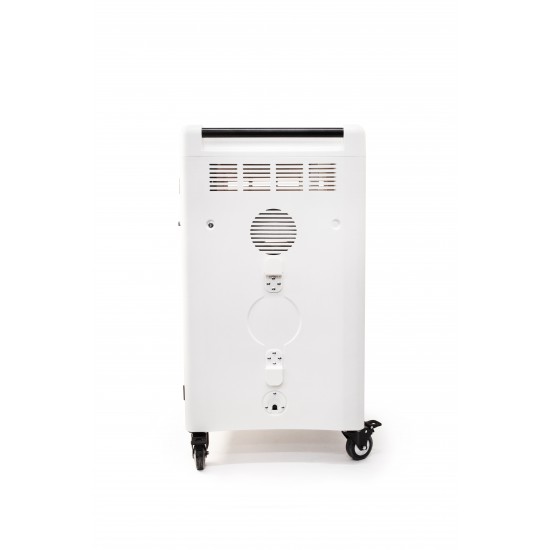 The PW-CS30USB is a safe and easy way to charge, sync and secure up to 30 tablets. It is designed to securely store, SYNC & CHARGE up to 30 tablet devices at once. This cost-effective solution is perfect for the current generation  of classroom devices with its easy to use slide out shelves and effortless cable management. With the lockable door, space saving & convenient design there is plenty of room for up to 30 tablets. The trolley is constructed with a combination of plastic and steel for durability and strength. The trolley is fitted with heavy duty castor wheels for fast and effortless mobility over all surfaces.

How Power Output is delivered
The three most common values used when discussing electricity are; 1) Voltage or “V” (measured in volts), 2) Resistance or “r” (measured in Ohms) and 3) Current or “I” (measured in Amps). When applying these terms to Consumer Electronics, we most commonly hear about them being applied around products such as USB charging devices.

In this application most of us are aware that USB run on approximately 5.0 volt resistance. However resistance is very rarely used and of little interest when compared to current. Current is important as it describes the strength of the voltage or how fast it flows.

If you consider your garden hose as an analogy - voltage would be the width of the hose, the current would be how fast the water flows through it. Thus you can fill up a bucket of water faster when you turn the tap on faster.

When talking about wall plug USB chargers, built-in circuitry converts the 240 volts mains power down to 5 volts (for USB) and in varying currents or amps. Car chargers do the same, however they convert 12 volts down to 5 volts with varying strengths. Early chargers had modest outputs of about 1.0 amp, however modern chargers can now output up to 2.4 amp which effectively can charge a device in almost half the time.

This 5 volt USB power socket can charge your smart phone or tablet, and be used to charge portable power storage devices called power banks. These power banks can deliver varying amounts of current or amps however it is measured in a slightly different way, called Milliamp Hour or mAH for short. E.g. if your smart phone has a 5,000mAh battery, you can get up to two full charges from a power bank that can hold up to 10,000mAh of power.